Multifunctional composites with ability to simultaneously store and deliver electrical energy while carry mechanical loads have been coined as “structural batteries”. The concept is to employ carbon fibres for mechanical performance and as electrodes, and to use a lithium ion conductive structural battery electrolyte matrix.  The dual functionality obviously distinguishes structural batteries from conventional Li-ion batteries. For an electric vehicle (car, ship, aircraft) the real engineering innovation is the possibility to entirely avoid the parasitic (heavy and spacious) batteries pertinent to traditional battery technology, such that the energy storage function is performed rather by the car body, the boat hull or the aircraft fuselage. Therefore, the structural battery design is often referred to as massless energy storage. Clearly, energy efficient designs meeting the demands on larger payloads and/or higher performance of electric vehicles can be met only if the lightweight solution is combined with a matching energy storage capability.

Current structural battery composites utilize carbon fibres (CF) as the negative electrode, proving electrochemical capacity, high modulus and strength, and electrical conductivity. In the positive electrode the CFs are coated with lithium iron phosphate (LFP), and the fibres provide mechanical performance and electron conductivity. The electrodes are separated by a thin separator in a bi-continuous polymer/liquid electrolyte matrix, where the polymer phase facilitate mechanical load transfer between the fibres and the liquid phase provides ion conductivity.

In this project we seek rational processing methods for manufacture of structural battery composites of consistent and high quality. The multifunctional performance of the structural battery and its constituents is to be characterized in combined electrochemical and mechanical tests developed in-house.

Organisations involved in the project

Description in a picture 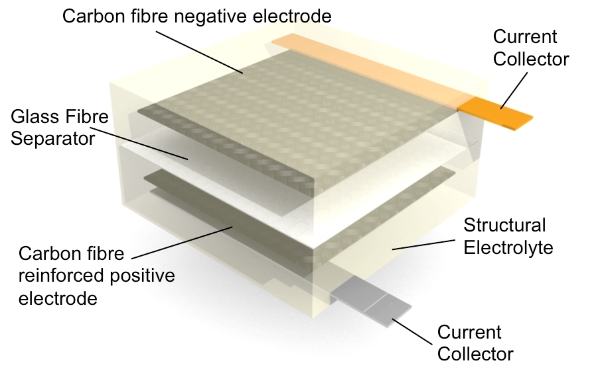